The transactions we take for granted, such as internet payments, holiday shopping or simply spreading the cost of expensive items, would all be complicated or impossible without credit cards.

But our flexible friends can become sneaky traitors if we don’t keep them under control.

Here are eight reasons you should treat your credit card with caution.

Borrowing on a credit card is a convenient way to budget. You can pay for things as you go along and then settle the bill at the end of the month. But if you don’t make full payment, expect to pay a high rate of interest – which may be all right for a month or two, but is a poor choice for longer-term borrowing.

The latest Bank of England figures show that consumers owe a total of nearly £57 billion on their cards – the equivalent of about £1,000 for every man, woman and child in the country.
Many would be better off with an unsecured loan, with fixed monthly payments.

2. Introductory rates can catch you out

Card issuers touting for custom have been offering attractive balance transfer deals and low or even 0% introductory rates.

That’s great if you can take full advantage and meet your bill in full when the time comes to pay up.
If you don’t, expect to be hit with a harsh rate of interest when your deal comes to an end.

Fees are edging up, too. MBNA is increasing its maximum fee for balance transfers from £50 to £75 to squeeze card holders who regularly rotate their line of credit. It is also raising its minimum balance transfer fee from 2% to 3%. The company is also starting to introduce annual fees for customers who repay their balance each month.

4. Take a rain check on cheques

How convenient they seem, but credit card cheques are a minefield for the unwary. Banks issuing credit card cheques include Royal Bank of Scotland, HBoS, Lloyds TSB, Capital One and MBNA.
The idea that you can write a cheque to someone who does not accept credit cards – perhaps your plumber or a local shop – and have the bill charged to your credit card seems like a great idea.
The problem is you will be charged for a cash advance, which will start to attract interest as soon as the cheque is processed and probably at a higher rate than a purchase going directly on to your card.
For example, RBS Platinum and the NatWest Classic card both charge 20.892% interest on credit card cheques. They offer no interest-free period and there is a fee of 2% for each cheque used, with a minimum charge of £1.50. This compares with a charge of is 16.9% for a purchase made direct with the credit card – almost four percentage points lower. Halifax One charges 21.95% and a 2% fee for cheques, compared with 15.9% for purchases – 6.05 points higher. MBNA is raising the minimum charge for cheque and cash transactions from 2% to 3% next month.

The new fees will also be applied to many of the company’s affinity cards, as well as its own cards.
Credit card cheque issuers have come under fire for sending the cheques out to people who haven’t asked for them, and tempting them into debt with a raft of charges that people don’t understand.
The Office of Fair Trading said earlier this month that consumers were facing unexpected charges up to £57 million a year because card firms were not clear about the charges levied on credit card cheques.
It called for an end to card companies sending them out to customers, unless they had agreed to receive them as part of their credit agreements.

If you travel overseas frequently, or purchase goods or services in foreign currency, check what you are being charged for currency transactions. The standard charge is 2.75%, called an “exchange rate loading”, but not all card issuers charge the same. Nationwide and Lombard Direct charge nothing, Liverpool Victoria charges nothing in the euro area. The Post Office, Clydesdale and Yorkshire Bank charge 2.5%; Egg, Royal Bank of Scotland and Mint charge 2.65 % and Amex charges 2.73%.

6. Miss a payment, pay a penalty

If you don’t pay your bill on time, be prepared for a late payment penalty. Fees have been hiked in recent months, as card issuers attempt to claw back losses made by 0% deals. It is estimated that banks and credit card companies earn around £500 million a year through late payment fees and interest from overdrafts on current accounts. Research from financial data provider Moneyfacts found that 31% of card customers have paid a late payment charge, and the OFT is looking into late payment fees. It has asked card companies to justify why they are so high.

Moneyfacts’ Emma Butler said, “A borrower with a balance of £2,000 paying an average rate of 14.9% will only be paying around £23 interest a month. The fees for late payment and over-limit charges are between £20 and £25, meaning one mistake can double the charge on the balance.

“With large balances being transferred, and a lot of consumers being at their card limit, these charges can be compounded. A late payment can incur a £25 charge, which can then push the borrower over their limit and incur another £25.”

7. Free insurance may be no insurance

Some credit cards give you free insurance, but many policies are inadequate or virtually worthless.
For instance, the small print in travel cover may mean that only the cardholder is covered, rather than the rest of the family who are holidaying together, or only the portion of travel paid for with the card is covered – so, perhaps that just covers the plane fare but not the taxi to the airport.

Analyst Defaqto found that three-quarters of the travel policies offered by card firms covered holders only while they were travelling to their destination and not during their holiday. Always buy insurance appropriate to your needs, and never rely on free cover offered with a credit card without checking the small print.

Many card issuers will try to get you to take out payment protection insurance – they make a lot of money from your premiums. PPI is supposed to cover you if you are unable to pay your credit card bill because of accident, sickness or unemployment. However, these policies are notorious for being mis-sold, and insurers have a high record of rejecting claims.

Defaqto found that more than a third of credit card firms don’t even allow customers to see the full terms of their policy before they apply for credit. Insurers also fail to investigate customers’ status sufficiently, and tend to rely on them taking the initiative in making declarations about their employment status or health. If they get it wrong, they end up paying for worthless cover, under which they are ineligible to make a claim. The industry is currently being investigated by the OFT, which is looking into claims of mis-selling and profiteering. 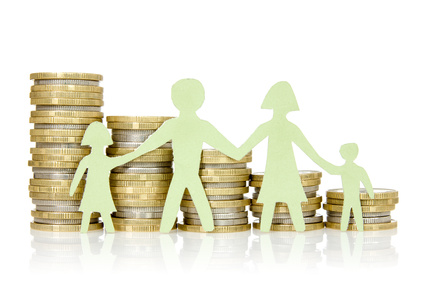 Older parents are more likely to struggle with debt

Current statistics show that the average age for mothers in the UK is 29.7, with that… Read more »

Brits 'most debt in Western Europe'

Overspending Britons are responsible for a third of all unsecured debt in Western Europe, according to… Read more »